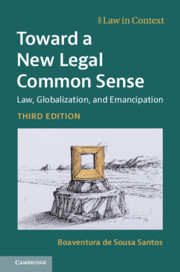 Paradigmatic transition is the idea that ours is a time of transition between the paradigm of modernity, which seems to have exhausted its regenerating capacities, and another, emergent time, of which so far we have seen only signs. Modernity as an ambitious and revolutionary sociocultural paradigm based on a dynamic tension between social regulation and social emancipation, the prevalent dynamic in the sixteenth century, has by the twenty-first century tilted in favour of regulation, to the determent of emancipation. The collapse of emancipation into regulation, and hence the impossibility of thinking about social emancipation consistently, symbolizes the exhaustion of the paradigm of modernity. At the same time, it signals the emergence of a new paradigm or new paradigms. This updated 2020 edition is written for students taking law and globalization courses, and political science, philosophy and sociology students doing optional subjects.